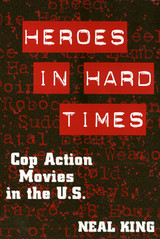 According to Neal King, cop action movies point both an accusatory finger and homoerotically murderous race at powerful white men. A close look at a massive and hugely popular fictional culture, Heroes in Hard Times considers the over 190 cop action movies released  between 1980 and 1997; examines the generic moral logic that they offer; and  explores the crisis in American masculinity that, King argues, propels the action in their stories.

King studies how, in the cop action genre, working-class police officers weigh in on such topics as racial justice, homosexuality, misogyny, unemployment, worker resistance, affirmative action, drug use, poverty, divorce, and the use of violence to deal with social problems. Facing their enemies with wisecracks and firepower, these men prove themselves at once complicitous in a system of violence and corruption and worthy to "blow away," with neither hesitation nor remorse, their -- society's -- menacing threats. The central male figures in these stories are heroes in their fight against criminals, but, as individuals, they fell undervalued by women, unappreciated by their bosses, and out of place in a society where fat cats and liberals have all the power. Such "hard times," King's study reveals, position them to simultaneously long for, disdain, and heroically -- if violently -- stake their frustrated claim to white male privilege.

Discussing such topics as white male guilt and the rage of the oppressed and examining such films as Lethal Weapon, Die Hard, and Silence of the Lambs, King's book notes the socially-charged roles given to American culture's fictional police heroes. The last artisan in a culture that has become increasingly corporate and bureaucratized, the movie cop is the last 'real man' in a world that has emasculated men and the last non-conforming patriot in a world that  pays more attention to rules than what is morally right.

A book that shows how modern mythology makes sense of rampant corruption (and provides entertainment in its punishment), Heroes in Hard Times will educate and provoke those interested in American popular culture, film, and gender studies.
AUTHOR BIOGRAPHY
Neal King is Assistant Professor of Sociology at Belmont University.
TABLE OF CONTENTS

1   Losing Ground at the Movies

5   Rage of the Oppressed