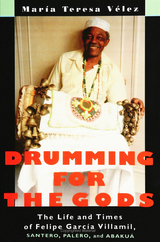 "I am Felipe Garcia Villamil" begins Drumming for the Gods, the life history of the Afro-Cuban artist whose music has survived both political and personal upheaval. "Balogun for thirty years. Oluana, of Matanzas, Cuba, for about forty years. Omoana for almost forty-five years. OluIyesa [he knows the secrets of the Iyesa drums]." A practitioner of sacred drumming for almost his entire life, Felipe practiced his trade in Cuba both before and after the Revolution and brought it with him to New York, where he continues to play for the gods.

This book focuses on three periods of Felipe's life, each marked by changes in his personal life and by important historical events. The first period covers his formative years during which he received his initial training. Through Felipe's story, we explore the legacy of slavery in Cuba, the nature of Afro-Cuban religions and their musical traditions, and the history of bata drums. The second period covers the critical years of the Cuban Revolution. Here we see the effect of social turmoil both n music and religious practice (santero, palero, and abakua). The third period covers Felipe's life in New York as a refugee/immigrant, and the role of music in rebuilding his identity. Felipe's story illuminates his cultural practices and beliefs as well as the ways in which an individual musician selects and  modifies the elements of his cultural heritage to create a voice that is personal and unique. Felipe not only lives through history but also makes history, shaping an identity that cannot be described as "Cuban immigrant," "Afro-Cuban," "religious drummer," or "santeria initiate," but is composed of all of them.

Through Felipe's experiences, Maria Teresa Velez reveals the interaction between social, political, economic, and cultural forces and an individual's own actions. The professionalization of musicians in Cuba following the Revolution and the plight of Afro-Cuban immigrants in New York are seen as large historical and social problems to which Felipe must personally respond. A noted ethnomusicologist, Velez provides the most insightful and comprehensive English-language study of an individual Cuban religious drummer available.

Drumming for the Gods is a must-read for those interested in ethnomusicology, Caribbean studies, and Afro-Cuban religions and culture.
AUTHOR BIOGRAPHY
Maria Teresa Velez is a freelance ethnomusicologist and a consultant for the International Division of S.I.F.I. S.p.A. Italy.
TABLE OF CONTENTS

Acknowledgments
A Note on Spelling
Prologue

PART THREE: Life as a Diasporic Musician
Leaving Cuba
Building the Present: Exercising His Trade in His New Home
The Tools of the Trade
Instruments as Immigrants: Ana Grosses the Ocean
Applying "Cultural Memory": Making Instruments
Bata Drums
Bembe Drums
Iyesa Drums
Drums as an Extension of the Self, as a Source of Living, as Life Itself
The Artisan Transformed into an Artist
Felipe's "There" Faces His "Here"
Felipe's Concept of Tradition
Syncretism
The Marielitos
"The Orichas Behave Different Here"
Confronting the Written
The Struggle of Memory over Forgetting
Teaching as a Way of Remembering
Teaching Women to Play Bata
Singing as a Way of Remembering