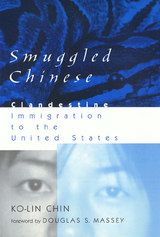 No one knows how many Chinese are being smuggled into the United States, but credible estimates put the number at 50,000 arrivals each year. Astonishing as this figure is, it represents only a portion of the Chinese illegally residing in the United States. Smuggled Chinese presents a detailed account of how this traffic is conducted and what happens to the people who risk their lives to reach Gold Mountain.

When the Golden Venture ran aground off New York's coast in 1993 and ten of the 260 Chinese on board drowned, the public outcry about human smuggling became front-page news. Probing into the causes and consequences of this clandestine traffic, Ko-lin Chin has interviewed more than 300 people -- smugglers, immigrants, government officials, and  business owners -- in the United States, China, and Taiwan. Their poignant and chilling testimony describes a flourishing industry in which smugglers -- big and little snakeheads -- command fees as high as $30,000 to move desperate but hopeful men and women around the world. For many who survive the hunger, filthy and  crowded conditions, physical and sexual abuse, and other perils of the arduous journey, life in the United States, specifically in New York's Chinatown, is a disappointment if not a curse. Few will return to China, though, because their families depend on the money and status gained by having a relative in the States.

In Smuggled Chinese, Ko-lin Chin puts a human face on this intractable international problem, showing how flaws in national policies and lax law enforcement perpetuate the cycle of desperation and suffering. He strongly believes, however, that the problem of human smuggling will continue as long as China's citizens are deprived of fundamental human rights and economic security.

Smuggled Chinese will engage readers interested in human rights, Asian and Asian American studies, urban studies, and sociology.
AUTHOR BIOGRAPHY
Ko-lin Chin is Associate Professor in the School of Criminal Justice at Rutgers University, Newark. He is author of many books in both English and Chinese, including Chinatown Gangs: Extortion, Enterprise, and Ethnicity.
TABLE OF CONTENTS

I.    LEAVING FOR THE BEAUTIFUL COUNTRY

1  In Search of the American Dream

2  In Search of the Beautiful Country

3  The Social Organization of Human Smuggling

III.   CLIMBING THE MOUNTAIN OF  GOLD

8  Life in the Mountain of Gold