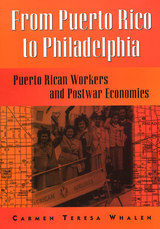 "We were poor but we had everything we needed," reminisces Dona Epifania. Nonetheless, when a man she knew told her about a job in Philadelphia, she grasped the opportunity to leave Coamas. "He went to Puerto Rico and told me there were beans to cook. I came here and cooked for fourteen workers." In San Lorenzo, Dona Carmen and her husband made the same decision: "We didn't want to, nobody wanted to leave....There wasn't any alternative." Don Florencio recalls that in Salinas work had gotten scarce, "especially for the youth, the young men....The farmworker that was used to cutting cane, already the sugar cane was disappearing," and government licensing regulations made fishing "more difficult for the poor."

Puerto Rican migration to the mainland following World War II took place for a range of reasons -- globalization of the economy, the colonial relationship between the United States and Puerto Rico, state policies, changes in regional and  local economies, social networks, and, not least, the decisions made by individual immigrants. In this wide-ranging book, Carmen Whalen weaves them all into a tapestry of Puerto Rican immigration to Philadelphia.

Like African Americans and Mexicans, Puerto Ricans were recruited for low-wage jobs, only to confront racial discrimination as well as economic restructuring. As Whalen shows, they were part of that wave of newcomers who came from areas in the Caribbean, Latin America, and Asia characterized by  a heavy U.S. military and economic presence, especially export processing zones looking for a new life in depressed urban environments already populated by earlier labor migrants. But Puerto Rican in-migration was also unique, especially in its regional and gender dimensions. Many migrants came as part of contract labor programs shaped by competing agendas.

By the 1990s, economic conditions, government policies, and racial ideologies had transformed Puerto Rican labor migrants into what has been called "the other underclass." The author analyzes this continuation of "culture and poverty" interpretations and contrasts it with the efforts of Philadelphia's Puerto Ricans to recreate their communities and deal with the impact of  economic restructuring and residential segregation in the City of Brotherly Love.
AUTHOR BIOGRAPHY
Carmen Teresa Whalen is Assistant Professor of Puerto Rican and Hispanic Caribbean Studies at Rutgers University.
TABLE OF CONTENTS

1. Looking for Work in the Global Economy: An Introduction

2. From the Country to the Cities: Internal Migration and Migration to the States

5. A Plethora of Limited Opportunities

7. From Labor Migrants to the "Underclass": Interpreting Puerto Rican Poverty

Appendix II: A Word on Sources