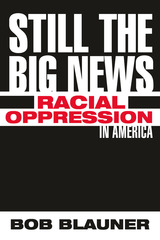 For more than thirty years, Bob Blauner's incisive writing on race relations has drawn a wide and varied audience. Whether his topic is the Watts riots in 1965, Chicano culture, or the tension between Blacks and Jews, his work is remarkable for its originality and candor. Beginning with the key essays of his landmark book, Racial Oppression in America, this volume makes the case that race and racism still permeate every aspect of American experience.

Blauner launched his concept of internal colonialism in the turbulent 1960's, a period in which many Americans worried that racial conflicts would propel the country into another  civil war. The notion that the systematic oppression of people of color in the United States resembles the situation of colonized populations in Third World countries still informs much of the academic research on race as well as public discourse. Indeed, today's critical race and whiteness studies are deeply indebted to Blauner's work on internal colonialism and the pervasiveness of white privilege. Offering a radical perspective on the United States' racial landscape, Bob Blauner forcefully argues that we ignore the persistence of oppression and our continuing failure to achieve equality at our own peril.
AUTHOR BIOGRAPHY
Bob Blauner is Professor Emeritus, Department of Sociology, Universtiy of California, Berkeley, and a freelance writer.
TABLE OF CONTENTS

Part I: The Emergence of a Critical Race Theory
1. Almost a Race War: The Climate of the Late 1960s
2. Theoretical Perspectives
3. White Privilege: The Key to Racial Oppression
4. Colonized and Immigrant Minorities
5. Internal Colonialism and Ghetto Revolt
6. Racism and Culture
7. Black Culture and Its Critics

Part II: Institutionalized Racism
8. Whitewash over Watts: The Politics of the McCone Commission
9. Jury Selection in the Huey Newton Murder Trial
10. More Than Just a Footnote: Chicanos and Their Movement
11. Toward the Decolonization of Social Research

Part III: Rethinking Critical Race Theory in a New Era
12. Some Self-Critical Reflections on Colonized and Immigrant Minorities
13. Talking Past One Another: Black and White Languages of Race
14. White Radicals, White Liberals, White People: Rebuilding the Anti-Racist Coalition
15. Blacks and Jews: A Study in Ambivalence
16. Race in the 2000 Election: Still the Big News