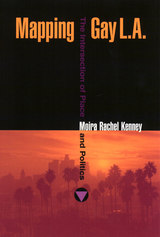 In this book, Moira Kenney makes the case that Los Angeles better represents the spectrum of gay and lesbian community activism and culture than cities with a higher gay profile. Owing to its sprawling geography and fragmented politic, Los Angeles lacks a single enclave like the Castro in San Francisco or landmarks as prominent as the Stonewall in Greenwich Village, but it has a long and instructive history of community building.

By tracking the terrain of the movement since the beginnings of gay liberation in 1960s Los Angeles, Kenney shows how activists laid claim to streets, buildings, neighborhoods, and, in the example of West Hollywood, an entire city. Exploiting the area's lack of cohesion, they created a movement that maintained a remarkable flexibility and built support networks stretching from Venice Beach to East LA. Taking a different path from San Francisco and New York, gays and lesbians in Los Angeles emphasized social services, decentralized communities (usually within ethnic neighborhoods), and local as well as national politics. Kenney's grounded reading of this history celebrates the public and private forms of activism that shaped a visible and vibrant community.
AUTHOR BIOGRAPHY
Moira Kenney is the Research Director at the Institute of Urban and Regional Development at the University of California, Berkeley.
TABLE OF CONTENTS

List of Maps
Foreword – Robert Dawidoff
Acknowledgments
1. Locating the Politics of Difference
2. Inclusion and Exclusion in West Hollywood
3. Beyond Gentrification: Social Services and the Redevelopment of Hollywood Boulevard
4. Separate Space and Separatism: Lesbian Culture and Community
5. Out of the Bars and into the Streets: Direct Action from Liberation to Transformation
6. The Remapped City
Notes
Index