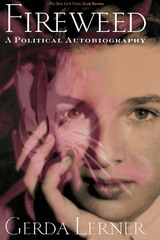 In Fireweed, Gerda Lerner, a pioneer and leading scholar in women's history, tells her story of moral courage and commitment to social change with a novelist's skill and a historian's command of context. Lerner's memoir focuses on the formative experiences that made her an activist for social justice before her academic career began. The child of a well-to-do Viennese Jewish family, she was still a teenager when a fascist regime came to power in 1934, and she became involved in the underground resistance movement. The Nazi takeover of Austria cast her into prison, then forced her and her family into exile; she alone was able to leave Europe. Once in the United States, she experienced the harshness of the Depression and despair over the fate of her family. Still, she persisted in adapting to the new culture and to becoming a writer. Here she met and married her life-long partner, Carl Lerner, a film editor and director. Together they become deeply involved in left-wing activities, from struggling to unionize the film industry and resisting the blacklist in Hollywood to community organizing for peace, for an interracial civil rights movement, and for better schools in New York City. Lerner insists that her decades of grassroots organizing largely account for the theoretical insights she was later able to bring to the development of women's history. In Fireweed, Lerner presents her life in the context of the major historical events of the twentieth century and the repression of dissent. Hers is a gripping story about surviving hardship and summoning the courage to live according to one's convictions.
AUTHOR BIOGRAPHY
Gerda Lerner, a past president of the Organization of American Historians, is Robinson-Edwards Professor of History, Emerita, at the University of Wisconsin-Madison. Her eleven books in history include Creation of Patriarchy; Creation of Feminist Consciousness; Why History Matters; and Black Women in White America: A Documentary History.
TABLE OF CONTENTS