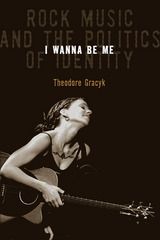 As someone who feels the emotional power of rock and who writes about it as an art form, Theodore Gracyk has been praised for launching "plainspoken arguments destined to change the future of rock and roll," (Publishers Weekly). In I Wanna Be Me, his second book about the music he cares so much about, Gracyk grapples with the ways that rock shapes—limits and expands—our notions of who we can be in the world.

Gracyk sees rock as a mass art, open-ended and open to diverse (but not unlimited) interpretations. Recordings reach millions, drawing people together in communities of listeners who respond viscerally to its sound and intellectually to its messages. As an art form that proclaims its emotional authenticity and resistance to convention, rock music constitutes part of the cultural apparatus from which individuals mold personal and political identities. Going to the heart of this relationship between the music's role in its performers' and fans' self-construction, Gracyk probes questions of gender and appropriation. How can a feminist be a Stones fan or a straight man enjoy the Indigo Girls? Does borrowing music that carries a "racial identity" always add up to exploitation, a charge leveled at Paul Simon's Graceland?

Ranging through forty years of rock history and offering a trove of anecdotes and examples, I Wanna Be Me, like Gracyk's earlier book, "should be cherished, and read, by rockers everywhere" (Salon).
AUTHOR BIOGRAPHY
Theodore Gracyk is Professor of Philosophy at Minnesota State University, Moorhead, and the author of Rhythm and Noise: An Aesthetics of Rock.
TABLE OF CONTENTS


Preface
Acknowledgments
Introduction: The Sex Pistols' "I Wanna Be Me"

Part I: Frameworks
1. Like a Rolling Stone
2. Don't Let Me Be Misunderstood: Issues of Meaning
3. Heard It through the Grapevine
4. You've Really Got a Hold on Me: Paradigms

Part II: Issues of Appropriation
5. All You've Got to Do Is Pick It Up
6. Don't Play That Song
7. Message in the Music
8. Speaking in Tongues