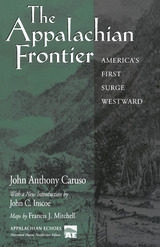 The Appalachian Frontier: America'S First Surge Westward
by John Anthony Caruso
University of Tennessee Press, 2003
Paper: 978-1-57233-215-7
John Anthony Caruso’s The Appalachian Frontier, first published in 1959, captures the drama and sweep of a nation at the beginning of its westward expansion. Bringing to life the region’s history from its earliest seventeenth-century scouting parties to the admission of Tennessee to the Union in 1796, Caruso describes the exchange of ideas, values, and cultural traits that marked Appalachia as a unique frontier.

Looking at the rich and mountainous land between the Ohio and Tennessee Rivers, The Appalachian Frontier follows the story of the Long Hunters in Kentucky; the struggles of the Regulators in North Carolina; the founding of the Watauga, Transylvania, Franklin, and Cumberland settlements; the siege of Boonesboro; and the patterns and challenges of frontier life. While narrating the gripping stories of such figures as Daniel Boone, George Rogers Clark, and Chief Logan, Caruso combines social, political, and economic history into a comprehensive overview of the early mountain South.

In his new introduction, John C. Inscoe examines how this work exemplified the so-called consensus school of history that arose in the United States during the cold war. Unabashedly celebratory in his analysis of American nation building, Caruso shows how the development of Appalachia fit into the grander scheme of the evolution of the country. While there is much in The Appalachian Frontier that contemporary historians would regard as one-sided and romanticized, Inscoe points out that “those of us immersed so deeply in the study of the region and its people sometimes tend to forget that the white settlement of the mountain south in the eighteenth century was not merely the chronological foundation of the Appalachian experience. As Caruso so vividly demonstrates, it is also represented a vital—even defining—stage in the American progression across the continent.”

The Author: John Anthony Caruso was a professor of history at West Virginia University. He died in 1997.

John C. Inscoe is professor of history at the University of Georgia. He is editor of Appalachians and Race: The Mountain South from Slavery to Segregation and author of Mountain Masters: Slavery and the Sectional Crisis in Western North Carolina.
TABLE OF CONTENTS