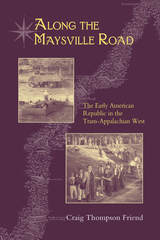 Along the Maysville Road: The Early American Republic in the Trans-Appalachian West
by Craig Thompson Friend
University of Tennessee Press, 2004
Cloth: 978-1-57233-315-4
Paper: 978-1-62190-307-9
Before the National Road and the Erie Canal, another transportation revolution was underway in the United States. Beginning in the 1770s, the Maysville Road—a sixty-five-mile dirt trail that stretched from the Ohio River to the Bluegrass region of Kentucky—served as a stage upon which people wrestled with issues of power, identities, and worldviews. For six decades, the road provided a conduit through which political, economic, social, and cultural ideas circulated into and within the early American West. Andrew Jackson brought the trail to national attention when he vetoed Henry Clay’s Maysville Road Bill in 1830. As an important migration route and the center of an early urban corridor, however, the Maysville Road had already made its mark on American history, offering a focal point for the cultural reconfiguration of the Early American Republic. Some of the era’s most important events rumbled along its length as the road witnessed the rise of republicanism, democracy, urban development, refinement, an awakening middle class, revivalism, racial slavery, and nationalism.
Along the Maysville Road details the life of the trail from its beginnings as a buffalo trace, through its role in populating and transforming an early American West, to its decline in regional and national affairs. This biography of a road thus serves as a microhistory of social and cultural change in the Early American Republic. Integral to this story are the people and groups who traveled and settled along the road: backcountry pioneers, refined Virginia gentry, poor and middling farmers, artisans and merchants from eastern cities, and of course the women and slaves who arrived with them. While these groups imported differing worldviews into the new American West, the merchant class’s commitment to commercial development, material acquisition, and individual achievement prophesied the triumph of a liberal economic order throughout nineteenth-century America. Alongside this individualistic impulse arose increasing pressure to abandon older identities based on regional origins and ethnic backgrounds and to accept a collective historical memory for the growing nation. Throughout the Early Republic, the call of the open road facilitated what it means to be “American.”

Craig Thompson Friend is associate professor of history at the University of Central Florida. He edits the Florida Historical Quarterly and is author of Kentucky Frontiers, 1750–1852 (forthcoming) and editor of The Buzzel About Kentuck: Settling the Promised Land.
REQUEST ACCESSIBLE FILE