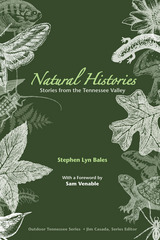 Natural Histories: Stories from the Tennessee Valley
by Stephen Lyn Bales
University of Tennessee Press, 2007
Paper: 978-1-57233-561-5
In sixteen thoroughly engaging essays, naturalist Stephen Lyn Bales ventures far and wide among the richly diverse flora and fauna of his native Tennessee Valley. Whether describing the nocturnal habits of the elusive whip-poor-will, the pivotal role the hedge plant Osage orange played in a key Civil War battle, or the political firestorm that attended the discovery of a tiny fish dubbed the snail darter, Bales illuminates in surprising ways the complicated and often vexed relationships between humans and their neighbors in the natural world.

Accompanied by the author's striking line drawings, each chapter in Natural Histories showcases a particular animal or plant and each narrative begins or ends in, or passes through the Tennessee Valley. Along the way, historical episodes both familiar and obscure-the de Soto explorations, the saga of the Lost State of Franklin, the devastation of the Trail of Tears, and the planting of a “Moon Tree” at Sycamore Shoals in Elizabethton-are brought vividly to life. Bales also highlights the work of present-day environmentalists and scientists such as the dedicated staffers of the Tennessee-based American Eagle Foundation, whose efforts have helped save the endangered raptors and reintroduce them to the wild.

Arranged according to the seasonal cycles of the valley, Bales's essays reveal the balance that nature has achieved over millions of years, contrasting it with the messier business of human endeavor, especially the desire to turn nature into a commodity, something to be subdued and harvested. Filled with delightful twists and turns, Natural Histories is also a book brimming with important lessons for us all.