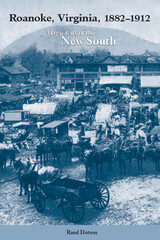 Roanoke, Virginia, 1882–1912: Magic City of the New South
by Rand Dotson
University of Tennessee Press, 2008
Paper: 978-1-57233-643-8
"This is a thoughtful, deeply researched, and particularly well-written book. Dotson maintains control over a significant body of research, never letting himself get overwhelmed by the details. He strikes a fine balance between discussions of social history, economic change, and local politics." —Louis Kyriakoudes, author of The Social Origins of the Urban South: Race, Gender, and Migration in Nashville and Middle Tennessee, 1890–1930

Roanoke, Virginia, 1882–1917, tells the story of a city that for a brief period was widely hailed as a regional model for industrialization as well as the ultimate success symbol for the rehabilitation of the former Confederacy.  In a region where modernization seemed to move at a glacial pace, those looking for signs of what they were triumphantly calling the “New South” pointed to Roanoke.

No southern city grew faster than Roanoke did during the 1880s.  A hardscrabble Appalachian tobacco depot originally known by the uninspiring name of Big Lick, it became a veritable boomtown by the end of the decade as a steady stream of investment and skilled manpower flowed in from north of the Mason-Dixon line.  The first scholarly treatment of Roanoke's early history, the book explains how native businessmen convinced a northern investment company to make their small town a major railroad hub.  It then describes how that venture initially paid off, as the influx of thousands of people from the North and the surrounding Virginia countryside helped make Roanoke - presumptuously christened the “Magic City” by New South proponents - the state's third-largest city by the turn of the century.

Rand Dotson recounts what life was like for Roanoke's wealthy elites, working poor, and African American inhabitants.  He also explores the social conflicts that ultimately erupted as a result of well-intended “reforms” initiated by city leaders.  Dotson illustrates how residents mediated the catastrophic Depression of 1893 and that year's infamous Roanoke Riot, which exposed the façade masking the city's racial tensions, inadequate physical infrastructure, and provincial mentality of the local populace.  Dotson then details the subsequent attempts of business boosters and progressive reformers to attract the additional investments needed to put their city back on track.  Ultimately, Dotson explains, Roanoke's early struggles stemmed from its business leaders' unwavering belief that economic development would serve as the panacea for all of the town's problems.

This insightful social history of Roanoke is a significant work, sure to attract readers with an interest in urbanization, race relations, and progressive reform.