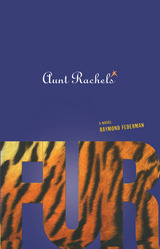 Aunt Rachel's Fur
by Raymond Federman
University of Alabama Press, 2001
Paper: 978-1-57366-093-8
In Aunt Rachel's Fur, Raymond Federman—French by birth, American by adoption, Jew by memory—plays with the language of his childhood to construct a story from digressions. Federman's narrative spirals into a temporal abyss as he rummages in old memories tattooed with cabbages, plump breasts, and the Final Solution. His book swirls with the narrative innovations that mark him as a leading experimenal surfictioneer.

Aunt Rachel's Fur is a novel about its own telling, an intimate meeting between voice and reader, in which flesh and blood are reduced to fiction, and fiction, by its telling, becomes fact. Reymond Namredef, a French expatriate, has returned to France after a disastrous decade in America, with 365 boxes of pasta and the hope of publishing his novel about a novelist. In a cafe in Paris, he meets a "professional listener," and, through a series of conversations, offers a loose account of his life that shows little respect for chronology. His story is woven of fragments, branching out over a lifetime and capturing the alchemy of fiction and memory.

Faced with the chaos of the twentieth century, Federman finds humanity in the absurd. Like novelists Mark Amerika and Ronald Sukenick, he skewers literary convention and pushes the boundary of postmodernism. Aunt Rachel's Fur is both a tribute to his love of the word—the story as it is told—and a further exploration of our understanding of fiction.

Raymond Federman was a French—American novelist and academic, known also for poetry, essays, translations, and criticism. He held positions at the University at Buffalo from 1973 to 1999, when he was appointed Distinguished Emeritus Professor.