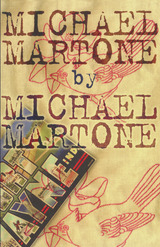 Michael Martone: Fictions
by Michael Martone
University of Alabama Press, 2005
Paper: 978-1-57366-126-3
A giddy exploration of the parts of books nobody ever reads

Michael Martone, by Michael Martone, continues the author's giddy exploration of the parts of books nobody ever reads. Michael Martone is its own appendix, comprising fifty “contributors notes,” each of which identifies in exorbitant biographical detail the author of the other forty-nine. Full of fanciful anecdotes and preposterous reminiscences, Martone’s self-inventions include the multiple deaths of himself and all his family members, his Kafkaesque rebirth as a giant insect, and his stints as circus performer, assembly-line worker, photographer, and movie extra.

Expect no autobiographical consistency here. A note revealing Martone's mother as the ghost-writer of all his books precedes the note beginning, “Michael Martone, an orphan . . . “ We learn of Martone’s university career and sketchy formal education, his misguided caretaking of his teacher John Barth’s lawn, and his impersonation of a poor African republic in political science class, where Martone's population is allowed to starve as his more fortunate fellow republics fight over development and natural resource trading-cards.

The author of Michael Martone, whose other names include Missy, Dolly, Peanut, Bug, Gigi-tone, Tony's boy, Patty's boy, Junior's, Mickey, Monk, Mr. Martone, and “the contributor named in this note," proves as Protean as fiction itself, continuously transforming the past with every new attribution but never identifying himself by name. It is this missing personage who, from first note to last, constitutes the unformed subject of Michael Martone.
AUTHOR BIOGRAPHY
Michael Martone was born in Fort Wayne, Indiana, and grew up there. He is the author of six other books of fiction including Alive And Dead In Indiana, Penseés: The Thoughts Of Dan Quayle, and Fort Wayne Is Seventh On Hitler’s List. He lives due south of his birthplace in Tuscaloosa, Alabama, where he edits Story County Books and teaches at the university.