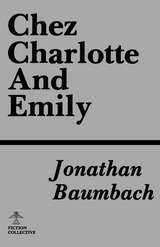 Imagine a bookish man named Francis D., swimming at a public beach in Cape Cod, who drifts out beyond his depth. Imagine that he doesn't drown, that the tide carries him to a private cove where he is rescued by two mysterious young women named Charlotte and Emily. Imagine then that Francis leaves behind his former humdrum life-his formidable wife and teenage daughter-and embarks on a series of violent and erotic adventures, as dream-like as reels of film. Imagine at the same time that a man named Joshua Quartz is telling his silent wife, Genevieve, the story of Francis's adventures, that they have little other communication, that the story is a way of keeping contact between husband and wife alive. Imagine that at some point Genevieve tells her own story, within and without Joshua's account. Baumbach's characters make occasional connections, make love and war, in the disguises of metaphor. If the main action is dream-like or fantastic, the real world is always at the window looking in.
TABLE OF CONTENTS
Preface
Chapter 1
Chapter 2
Chapter 3
Chapter 4
Chapter 5
Chapter 6
Chapter 7
Chapter 8
Chapter 9
Chapter 10
Chapter 11
Chapter 12
Chapter 13
Chapter 14
Coda