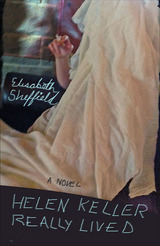 What does it mean to really live? Or not?

Set in eastern, upstate New York, Helen Keller Really Lived features a fortyish former barfly and grifter who must make a living in the wake of her wealthy husband’s death, and who finds work in a clinic helping women seeking reproductive assistance. The other main character is the grifter’s dead ex-husband, a Ukrainian hooker-to-healer success story, who prior to his demise was a gynecologist and after, an amateur folklorist, or ghostlorist, who collected and provided scholarly commentary on the stories of his fellow “revenants.”

Their intertwined stories explore the mistakes, miscarriages, inadequacies, and defeats that may have led to their divorce, including his failure (according to her) to “fully live.”

As it investigates the theme of what it means to “really live” or not, Elisabeth Sheffield’s brilliant new novel is also an exploration of virtual reality in the sense of the experience provided by literature. It is a novel awash in a multitude of voices, from the obscenity-laced, Nabokovian soliloquys of the dead Ukrainian doctor, to the trade-school / midcentury-romance-novel-constrained style of his dead mother-in-law.
AUTHOR BIOGRAPHY
Elisabeth Sheffield is the author of the novels Gone and Fort Da. She teaches in the creative writing program at the University of Colorado, Boulder.
TABLE OF CONTENTS
"Give me back my body, give me back my body."
Chapter One. “The Truth Sounds Like A Fiction That Can And Will Be Used Against You”
"On average, the limits of a ghost’s rationality are very narrow ..."
File 2010/Transcription of Revenant Dictation (Former Sex: Female; Deceased 15.11.2010)
Chapter Two. “Kick Me”
"Yeah, it’s the life of the mind for me now, baby."
Chapter Three. “Helen Keller Really Lived”
File 1994/Transcription of Revenant Dictation (Former Sex: Male; Deceased: 22.07.1995)
Chapter Four. “A Reason to Fight”
"I see you’ve just decided to ignore my e-mails, króshka."
Chapter Five. “You See Connections and Patterns Where there are None”
"Remember the winter I quote unqote dragged you to the ..."
File 1993: Transcription of Revenant Composition (Former Sex: Female; Deceased: 31.12.1993)
"Here’s a story, détka"
File 1984/Three Revenant Compositions (Former Sex: Male; Deceased: 13.05.1984)
Chapter Six. “The First Cut is the Deepest”
"E12.03.11: There will be two of us and we will be graded."
"I’d say I have too much time on my hands, if I had them."
"E08.07.11: On December 25, 2021, I will be given a palm-sized ..."
Chapter Seven. “Rabbits Are Smarter Than People Think”
"I’m on to you, my Sneekalinka."
File 2011/Electronic Copy of Revenant Composition, “The Ghost Writer,” in Word DOCX (Former Sex: Female; Deceased: circa 2011)
Chapter Eight. “Life is Not a Lab”
"'Pay attention to body language although if you do not ... '"
Chapter Nine. “Not Okay”
"Where do I start, détka?"
File 2008/Revenant Provided PDF (Former Sex: Male; Deceased: circa 2008?)
Chapter Ten. “The Intelligence of Absence”
"So this is what it comes too."
"E01.06.11: I will be born at the end of twenty-eight weeks of ..."
Acknowledgments