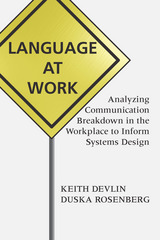 People are very creative in their use of language. This observation was made convincingly by Chomsky in the 1950s and is generally accepted in the scientific communities concerned with the study of language. Computers, on the other hand, are neither creative, flexible, nor adaptable. This is in spite of the fact that their ability to process language is based largely on the grammars developed by linguists and computer scientists. Thus, there is a mismatch between the observed human creativity and our ability as theorists to explain it. Language at Work examines grammars and other descriptions of language by combining the scientific and the practical. The scientific motivation is to unite distinct intellectual traditions, mathematics and descriptive social science, which have tried to provide an adequate explanation of language and its use on their own to no avail. This volume argues that Situation Theory, a theory of information couched in mathematics, has provided a uniform framework for the investigation of the creative aspects of language use. The application of Situation Theory in the study of language use in everyday communication to improve human/computer interaction is explored and espoused.
TABLE OF CONTENTS