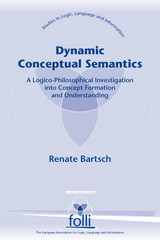 Presented in this book is a theory of concept formation and understanding that does not make use of a notion of an innate mental language as a means of concept representation. Instead, experimental concepts are treated semantically as stabilising structuring of growing sets of data, which are sets of experienced satisfaction situations for expressions, and theoretical concepts are based on coherent sets of general sentences held true. There are two kinds of structures to be established: general concepts by means of similarity sets under perspectives and historical concepts. This gives rise to a theory of understanding new situations and expressions by integrating new data into established sets of data salva stability, or by extending the conceptual structure in a metaphorical or metonymical way. The theory provides a way to understand what identity between propositional attitudes amounts to, especially how people can have more or less the same belief.
TABLE OF CONTENTS