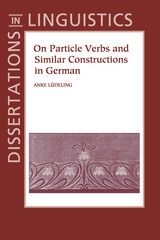 Linguistic distinctions between the notions of a phrase, a word, and their components are challenged by so-called particle verbs in German and similar features in other languages. Particle verbs look like single words, yet are typically assembled from word-like fragments that together behave more like components of a phrase than of a word. The resolution of existing scholarly ambivalence has exciting ramifications, from questioning the existence of particle verbs to a broader understanding of what constitutes a word.

Particle verbs have previously been analyzed as morphological objects or as phrasal constructions, but neither approach fits cleanly within its chosen framework. The resolution presented here is that particle verbs should be seen as lexicalized phrasal constructions. Emphasizing morphological and syntactic testability, over a hundred colloquial examples are shown to break the rules of previous approaches while remaining consistent with this book's proposition. To distinguish particle verbs from similar constructions, and to demonstrate how structural and morphological factors have been misidentified in the past, preverb verb constructions (PVCs) are introduced and diagrammed. This reveals the roles of listedness and non-transparency in word formation and clarifies the conclusion that particle verbs do not form a definable class of words.
TABLE OF CONTENTS