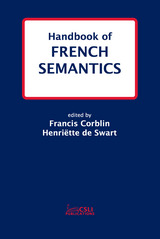 This book focuses on the semantic particularities of the French language, covering five empirical themes: determiners, adverbs, tense and aspect, negation, and information structure. The specialists contributing here—including general linguists in France and French linguists in the Netherlands—take formal approaches to semantics and its interface with syntax and pragmatics, highlighting meaning in its relation to both structure and use. Their results should be of particular interest to French and Romance linguists who want to study French from a formal semantic perspective and to general linguists who are interested in cross-linguistic semantics.
TABLE OF CONTENTS