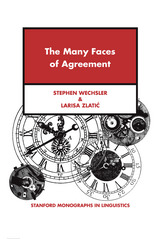 Agreement features correlate closely with semantics as well as with noun morphology. This book presents a precise formal theory of those correlations, illustrated with Serbo-Croatian and other languages. In explaining regular agreement as a network of constraints, the theory also predicts a restricted set of exceptional situations where normal agreement can give way to agreement mismatches.

With this framework in place, the authors explore a number of factors that affect agreement processes. The theory even explains the striking cross-linguistic generalizations expressed in Corbett's Agreement Hierarchy. Agreement is shown to be a distributed phenomenon, manifesting its many faces among the various components of grammar.
TABLE OF CONTENTS