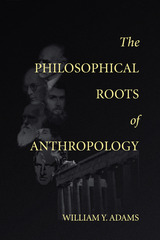 Anthropologists claim to have made mankind aware of its own prehistory and its importance to human self-understanding. Yet, anthropologists seem hardly to have discovered their own discipline's prehistory or to have realized its importance. William Y. Adams attempts to rectify this myopic self-awareness by applying anthropology's own tools on itself and uncovering the discipline's debt to earlier thinkers.

Like most anthropologists, Adams had previously accepted the premise that anthropology's intellectual roots go back no further than the moral philosophy of the Enlightenment, or perhaps at the earliest to the humanism of the Renaissance. In this volume, Adams recognizes that many good ideas were anticipated in antiquity and that these ideas have had a lasting influence on anthropological models in particular. He has chosen five philosophical currents whose influence has been, and is, very widespread, particularly in North American anthropology: progressivism, primitivism, natural law, German idealism, and "Indianology". He argues that the influences of these currents in North American anthropology occur in a unique combination that is not found in the anthropologies of other countries. Without neglecting the anthropologies of other countries, this work serves as the basis for the explanation of the true historical and philosophical underpinnings of anthropology and its goals.
TABLE OF CONTENTS


Preface
1. Ideology, Philosophy, Anthropology, and the Other
2. Progressivism: The Tap Root
3. Primitivism
4. Natural Law
5. “Indianology”
6. German Idealism
7. Other Roots; Other Trees
8. In Search of the Anthropological Self
An Annotated Bibliography of Secondary Sources
Index