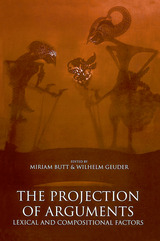 It is becoming increasingly clear that the standard approach to argument linking in terms of "thematic roles", which are determined by the lexical meaning of verbs, has some serious shortcomings. This volume sets out to explore alternatives to a rigid model of lexical projection. It brings together a set of papers from different backgrounds that converge on the general hypothesis that the many semantic factors which influence the projection of arguments should be attributed to compositional processes rather than to the fixed contents of lexical entries. Proposals for a reassessment of the lexicon-syntax interface include flexible models of lexical meaning with productive derivation of alternants, as well as models where the structural context supplants much of the putative role of lexical entries. The topics addressed include questions of argument hierarchies and adicity of predicates, and the syntax and semantics of argument alternations in a set of very diverse languages, which include English, Dutch, Scottish Gaelic, Finnish, Hebrew, Kannada, Malay, Inuit, and Yaqui.
TABLE OF CONTENTS