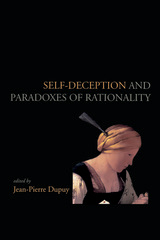 Self-deception is one of the topics that lends itself best to the task of exploring the possibilities of cross-fertilization between 'continental philosophy' and 'analytic philosophy'. Fifty years ago, in Being and Nothingness, Sartre defined the core notion of 'Bad Faith' as lying to oneself. On the other side of the Atlantic, self-deception has become one of the most exciting puzzles in the philosophy of mind, and a number of paradoxes encountered by the theory of rational choice involve that very same notion. One of the objectives is to show that bridges can be thrown over the gap between the two traditions, but also that both of them make self-deception too intrapsychic and suffer from a serious individualistic bias. The conference was intended to explore the intersubjective and social dimensions of self-deception.
TABLE OF CONTENTS