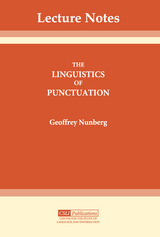 Geoffrey Nunberg challenges a widespread assumption that the linguistic structure of written languages is qualitatively identical to that of spoken language: It should no longer be necessary to defend the view that written language is truly language, but it is surprising to learn of written-language category indicators that are realized by punctuation marks and other figural devices.' He shows that traditional approaches to these devices tend to describe the features of written language exclusively by analogy to those of spoken language, with the result that punctuation has been regarded as an unsystematic and deficient means for presenting spoken-language intonation. Analysed in its own terms, however, punctuation manifests a coherent linguistic subsystem of 'text-grammar' that coexists in writing with the system of 'lexical grammar' that has been the traditional object of linguistic inquiry. A detailed analysis of the category structure of English text-sentences reveals a highly systematic set of syntactic and presentational rules that can be described in terms independent of the rules of lexical grammar and are largely matters of the tacit knowledge that writers acquire without formal instruction. That these rules obey constraints that are structurally analogous to those of lexical grammar leads Nunberg to label the text-grammar an 'application' of the principles of natural language organization to a new domain. Geoffrey Nunberg is a researcher at Xerox Palo Alto Research Center.
TABLE OF CONTENTS