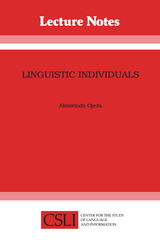 The goal of semantics is the insightful identification of the set of meanings that human language can express- the contruction of what has been called the metaphysics of natural language. A formal attempt to contruct such a metaphysics has generally involved identifying a set of individuals referred to as the universe of discourse. Until recently, however, semanticists have had little to say about the structure of this set.

Ojeda argues that the structure of the set of linguistic individuals is a mereology, that is, the domain of discourse is made up of kinds and the instantiations of kinds. His argument forms the four main slections of this work. The first examines the semantics of countability (countable stems, number inflection, adjectives of measure, and determiners); the second explores the semantics of uncountability (the individuation of reference, and non-Boolean mass predicates); the third takes up the semantics of nominality (the mereological homogenetiy of mouns and the constraints on nouns in classifier languages); and the last investigates the semantics of the conceptional neauter, a pronominal category discussed by Otto Jesperson.

Ojeda's investigations contribute to the characterization of linguistiv individuals and proide for a new basis for the semantics of individuation.

Almerindo E. Ojeda is a professor of linguistics at the University of California at Davis.

Center for the Study of Language and Information- Lecture Notes, Number 7
TABLE OF CONTENTS