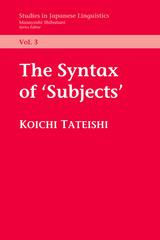 Linguists who work on the Japanese language have disagreed about the notion of subject with resopect to Japanese; many linguists argue that there is no formal symtactic position for the subject in Japanese. Tateishi does deeper research on the surface syntax of the subject, and looks in particular at the syntax of the subject and phenomena which have been treated as S-adjunctions. These two have been identified with each other on many occasions in the history of Japanese linguistics and are of interest with respect to the debate over configurationality in the language, which has been revivedd in different forms following the emergence of the VP-Internal Subject Hypothesis, the merits of which Tateishi discusses at length.

Koichi Tateishi is a professor of linguistics at the Kyoto University of Foreign Studies.
TABLE OF CONTENTS