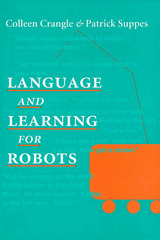 Robot technology will find wide-scale use only when a robotic device can be given commands and taught new tasks in a natural language. How could a robot understand instructions expressed in English? How could a robot learn from instructions? Crangle and Suppes begin to answer these questions through a theoretical approach to language and learning for robots and by experimental work with robots.

The authors also examine the use of explicit verbal instruction to teach a robot new procedures, propose ways a robot can learn from corrective commands containing qualitative spatial expressions, and discuss the machine-learning of a natural language use to instruct a robot in the performance of simple physical tasks. Two chapters focus on probabilistic techniques in learning.
TABLE OF CONTENTS