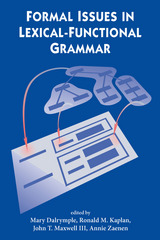 Lexical-Functional Grammar was first developed by Joan Bresnan and Ronald M. Kaplan in the late 1970s, and was designed to serve as a medium for expressing and explaining important generalisations about the syntax of human languages and thus to serve as a vehicle for independent linguistic research. An equally important goal was to provide a restricted, mathematically tractable notation that could be interpreted by psychologically plausible and computationally efficient processing mechanisms. The formal architecture of LFG provides a simple set of devices for describing the common properties of all human languages and the particular properties of individual languages. This volume presents work conducted over the past several years at the Xerox Palo Alto Research Center, Stanford University, and elsewhere. The different sections link mathematical and computational issues and the analysis of particular linguistic phenomena in areas such as wh-constructions, anaphoric binding, word order and coordination.
AUTHOR BIOGRAPHY
Annie Zaenen is a consulting professor in linguistics at Stanford University.