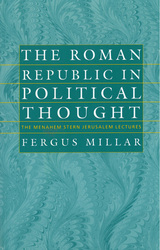 It is a fact that the very long-lived Roman Republic has consistently played a surprisingly slight role in political theory and discussions about the nature of democracy, forms of government, and other matters, particularly when compared to the enormous attention paid to fifth-century BCE Athenian democracy. Fergus Millar re-opens the issue of how the Roman Republic was understood and used by political thinkers from the Ancient World to the present. Describing both the reality of the late Roman Republic and showing how its nature was distorted even by contemporary sources, he tracks its treatment (or absence) in political discourse from Thomas Aquinas, Machiavelli, Montesquieu, and Rousseau, and in debates surrounding the creation of the American constitution, particularly in the Federalist papers. In brief, clear prose, with quotations in English from important works, and economical use of endnotes, he reinforces his unconventional thesis about the significance of direct democracy in the late Roman Republic. In the process, he also provides an unprecedented tour through 2000 years of Western political theory from the point of view of the Roman Republic, in general, and theories of direct democracy and the balance of power, in particular.
AUTHOR BIOGRAPHY
ROCHELLE L. MILLEN is Professor of Religion at Wittenberg University, Springfield, Ohio.