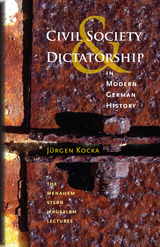 In this rich and thought-provoking work, Jürgen Kocka focuses his analytic lens on Germany’s long twentieth century, from the empire to the present. He begins by establishing the semantic problematic in the German term Bürgertum and presenting an analytical survey of German civil society over the past 120 years. He then offers a fascinating social history of the GDR, along with a comparative analysis of the East German dictatorship and that of the Third Reich. He further compares Germany’s “two dictatorships” in regard to historical memory, post-regime justice, and historiography before and after reunification. Kocka concludes with a wonderfully expansive view of historical interpretation and even argues for the place of trendiness and fashion in the profession.
AUTHOR BIOGRAPHY
JÜRGEN KOCKA was president of the Social Science Research Center in Berlin until 2007 and professor of modern history at the Free University of Berlin until 2009. He has published numerous books, including Industrial Culture and Bourgeois Society.
TABLE OF CONTENTS


Foreword – Shulamit Volkov • Introduction • Bourgeois Culture and Civil Society: The German Case in a European Context • The Opportunities of Semantic Ambivalence • Bu¨rgertum: Bourgeoisie Defined by Its Opponents and Its Culture • Civil Society: The History and Definition of a Concept • Universal Claims versus Exclusive Realities in the Nineteenth Century • Bourgeoisie and Civil Society during the Kaiserreich • A Short View on the Twentieth Century • Comparing Dictatorships: Toward a Social History of the German Democratic Republic • Why a History of the GDR? • The Political Construction of a New Society • Social Blockades and the Limits of Political Control • 1949–1989: Four Periods of GDR History • The GDR in Comparative Perspectives • Dealing with Difficult Pasts: Collective Memories and Politics in Germany after 1945 and 1990 • How West Germans and East Germans Dealt with Their Nazi Past, 1945–1990 • Remembering the GDR after Unification: Different Layers, Controversial Debates • Memories Compete and Reinforce One Another • Historians, Fashion, and Truth: The Last Fifty Years • History: A Changeable Discipline • An Example: Changing Views of World War I • Five Major Trends • The Productivity of Fashion and the Attainability of Truth: History as a Profession • Notes • Index