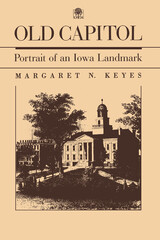 Built between 1839 and 1842, the domed structure of Iowa City's Old Capitol served as the third territorial capitol and the first state capitol of Iowa. In 1857, when the state government was moved to Des Moines, Old Capitol became the first building of the new University of Iowa. It remains today the centerpiece of this handsome campus. The story of its history and restoration, told in this elegantly illustrated book, is an intriguing account of historical architectural detection.

Using primary sources, including manuscripts, vouchers, account books, newspaper stories, correspondence, and documents from the National Archives and Iowa repositories, Margaret Keyes portrays the major events of the total history of Old Capitol since its site was determined.

AUTHOR BIOGRAPHY
Margaret Keyes is professor emeritus of home economics at the University of Iowa and former director of Old Capitol. She is the author of many articles on historical renovation and other subjects as well as Nineteenth Century Home Architecture of Iowa City (Iowa, 1993).
TABLE OF CONTENTS
Contents
Acknowledgments
Introduction
1. The Territorial and Statehood Years, 1842-1857
2. The University Years, 1857-1970
3. The Rehabilitation, 1921-1924
4. The Architectural Restoration, 1970-1976
5. The Interior
6. The Dedication
Epilogue
Appendix A: Old Capitol Restoration Committee
Appendix B: University Student Involvement
Appendix C: Old Capitol Dedication Program
Notes
Select Bibliography
Index
REQUEST ACCESSIBLE FILE