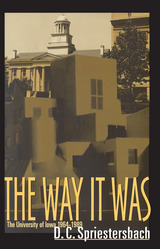 The fall of 1964 was an exciting time at the University of Iowa. Its fourteenth president, Howard Bowen, had just arrived, and on a sunny October afternoon he made his first speech to the faculty. This occasion was note worthy enough—former president Virgil Hancher had held the job for twenty-four years—to attract the attention of a professor of speech pathology who had previously confined his considerable energies to teaching and research. Bowen's vision of what the university could become was so intriguing, so compelling, that this professor wrote and offered to help him achieve his objectives in any way possible. This quixotic offer changed Duane Spriestersbach's life and becomes the starting point for his story of his years as a University of Iowa administrator.

Drawing upon his personal files, the university archives, and interviews with many faculty members and administrators, Spriestersbach has created both an institutional and a personal history of the university. Judged by any standard, these years were tumultuous ones for higher education. Economic pressures from the state legislature, issues surrounding grants from such agencies as the National Institutes of Health and the National Science Foundation, the civil rights movement, student and faculty protests during the Vietnam era, massive changes in the physical and administrative shape of the campus, and the computerization of all parts of campus life had far-reaching consequences. Spriestersbach was at the center of these events at the University of Iowa; his perspective is unique, refreshing, and educational.

Spriestersbach's account of the Vietnam years and of the evolution of computers at Iowa will be particularly interesting to readers. He reported to four presidents, served as acting president, managed hundreds of meetings both dramatic and mundane, and reacted to many administrative restructurings. In this story of his life at the University of Iowa, he reveals the truth behind these words from his 1964 letter to President Bowen: “I think I am an idealist, a person with imagination, and a guy in a hurry. I believe investigation will show that I am a person with competitive administrative and executive abilities.”