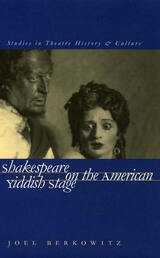 The professional Yiddish theatre started in 1876 in Eastern Europe; with the assassination of Tsar Alexander II in 1881, masses of Eastern European Jews began moving westward, and New York—Manhattan’s Bowery and Second Avenue—soon became the world’s center of Yiddish theatre. At first the Yiddish repertoire revolved around comedies, operettas, and melodramas, but by the early 1890s America's Yiddish actors were wild about Shakespeare. In Shakespeare on the American Yiddish Stage, Joel Berkowitz knowledgeably and intelligently constructs the history of this unique theatrical culture.

The Jewish King Lear of 1892 was a sensation. The year 1893 saw the beginning of a bevy of Yiddish versions of Hamlet; that year also saw the first Yiddish production of Othello. Romeo and Juliet inspired a wide variety of treatments. The Merchant of Venice was the first Shakespeare play published in Yiddish, and Jacob Adler received rave reviews as Shylock on Broadway in both 1903 and 1905. Berkowitz focuses on these five plays in his five chapters. His introduction provides an orientation to the Yiddish theatre district in New York as well as the larger picture of Shakespearean production and the American theatre scene, and his conclusion summarizes the significance of Shakespeare’s plays in Yiddish culture.
AUTHOR BIOGRAPHY
Joel Berkowitz is assistant professor of modern Jewish studies at the State University of New York at Albany.
REVIEWS
"Berkowitz's revealing study lovingly and meticulously recreates a fascinating moment when a Yiddish theatre tried to 'improve' itself by appropriating Shakespeare and his considerable reputation--and in the process created a newly enriched kind of Shakespeare, brimming over with pathos, melodrama, unabashed theatricality, and yiddishkeit." --Harley Erdman, author of Staging the Jew: The Performance of an American Ethnicity, 1860-1920