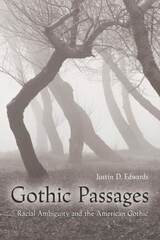 This groundbreaking study analyzes the development of American gothic literature alongside nineteenth-century discourses of passing and racial ambiguity.

By bringing together these areas of analysis, Justin Edwards considers the following questions. How are the categories of “race” and the rhetoric of racial difference tied to the language of gothicism? What can these discursive ties tell us about a range of social boundaries—gender, sexuality, class, race, etc.—during the nineteenth century? What can the construction and destabilization of these social boundaries tell us about the development of the U.S. gothic?

The sources used to address these questions are diverse, often literary and historical, fluidly moving between “representation” and “reality.” Works of gothic literature by Edgar Allan Poe, Herman Melville, Frances Harper, and Charles Chesnutt, among others, are placed in the contexts of nineteenth-century racial “science” and contemporary discourses about the formation of identity. Edwards then examines how nineteenth-century writers gothicized biracial and passing figures in order to frame them within the rubric of a “demonization of difference.” By charting such depictions in literature and popular science, he focuses on an obsession in antebellum and postbellum America over the threat of collapsing racial identities—threats that resonated strongly with fears of the transgression of the boundaries of sexuality and the social anxiety concerning the instabilities of gender, class, ethnicity, and nationality.

Gothic Passages not only builds upon the work of Americanists who uncover an underlying racial element in U.S. gothic literature but also sheds new light on the pervasiveness of gothic discourse in nineteenth-century representations of passing from both sides of the color line. This fascinating book will be of interest to scholars of American literature, cultural studies, and African American studies.

Justin Edwards is an assistant professor of English at the University of Copenhagen, where he teaches American and Canadian gothic literature. He is the coeditor of American Modernism across the Arts and the author of Exotic Journeys: Exploring the Erotics of U.S. Travel Literature, 1840-1930.