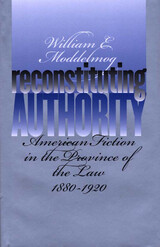 In Reconstituting Authority, William Moddelmog explores the ways in which American law and literature converged in the late nineteenth and early twentieth centuries. Through close readings of significant texts from the era, he reveals not only how novelists invoked specific legal principles and ideals in their fictions but also how they sought to reconceptualize the boundaries of law and literature in ways that transformed previous versions of both legal and literary authority.
Moddelmog does not assume a sharp distinction between literary and legal institutions and practices but shows how writers imagined the two fields as engaged in the same cultural process. He argues that because the law was instrumental in setting the terms by which concepts such as race, gender, nationhood, ownership, and citizenship were defined in the nineteenth century, authors challenging those definitions had to engage the law on its own terrain: to place their work in a dialogue with the law by telling stories that were already authorized (though perhaps suppressed) by legal institutions.
The first half of the book is devoted in separate chapters to William Dean Howells, Helen Hunt Jackson, and Pauline Hopkins. The focus shifts from large theoretical concerns to questions of contract and native sovereignty, to issues of African American citizenship and racial entitlement. In each case the discussion is rooted in a larger consideration of the rule (or misrule) of law.
The second half of the book turns from the rule of law to the issue of property, specifically the Lockean version of the self that tied identity to legal conceptions of property and economic value. In separate discussions of Charles Chesnutt, Edith Wharton, and Theodore Dreiser, Reconstituting Authority reveals authors as closely engaged with those changing perspectives on property and identity, in ways that challenged the racial, gendered, and economic consequences of America's possessive individualism.
AUTHOR BIOGRAPHY
William Moddelmog was formerly a lecturer in the University of California at Los Angeles writing program. He is assistant professor in the English Department at Ohio State University, Newark.
TABLE OF CONTENTS
Acknowledgments
Introduction Professionalism in Law and Literature
Chapter 1 The “Official” Narratives of William Dean Howells
Chapter 2 Helen Hunt Jackson and the Romance of Indian Nationhood
Chapter 3 Narrating Citizenship in Pauline Hopkins’s "Contending Forces"
Chapter 4 Charles Chesnutt’s Fictions of Ownership
Chapter 5 Privacy and Subjectivity in Edith Wharton’s "The House of Mirth"
Chapter 6 Theodore Dreiser’s Progressive Nostalgia
Notes
Bibliography
Index
REQUEST ACCESSIBLE FILE