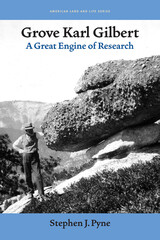 As Stephen Pyne reveals in his biography, few other scientists can match Grove Karl Gilbert’s range of talents. A premier explorer of the American West who made major contributions to the cascade of new discoveries about the earth, Gilbert described two novel forms of mountain building, invented the concept of the graded stream, inaugurated modern theories of lunar origin, helped found the science of geomorphology, and added to the canon of conservation literature.
Gilbert knew most of geology's grand figures--including John Wesley Powell, Clarence Dutton,  and Clarence King--and Pyne's chronicle of the imperturbable, quietly unconventional Gilbert is couterpointed with sketches of these prominent scientists. The man who wrote that "happiness is sitting under a tent with walls uplifted, just after a brief shower,", created answers to the larger questions of the earth in ways that have become classics of his science.
AUTHOR BIOGRAPHY
Stephen Pyne is Regents Professor and historian in the School of Life Sciences, Arizona State University, and the author of many books and articles on the history of exploration and environmental history. In 1995 he was awarded the Robert Kirsch Award from the Los Angeles Times for his body-of-work contribution to American letters.
REVIEWS

"Stephen Pyne has chosen to emphasize the unique Gilbert blend of geology and mechanics in his treatment of Gilbert’s scientific life and career. Pyne’s fresh insights into Gilbert’s four great monographs, and his recognition of a unifying method and motivation in Gilbert’s studies, are sufficient to grant this biography a lasting place in the literature of science history. . . . Pyne’s biography will stand for many years as the definitive study of Gilbert’s scientific contributions, and it will serve as an indisputable reference for any student of nineteenth-century geology."—Annals of Science

"Stephen J. Pyne has filled a gap in the history of American geology by writing the first modern biography of Grove Karl Gilbert . . .His account places Gilbert's professional attainments squarely in the context of other developments in the coming of age of American geology"--Science