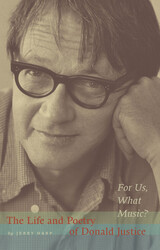 When Donald Justice wrote in “On a Picture by Burchfield” that “art keeps long hours,” he might have been describing his own life. Although he early on struggled to find a balance between his life and art, the latter became a way of experiencing his life more deeply. He found meaning in human experience by applying traditional religious language to his artistic vocation. Central to his work was the translation of the language of devotion to a learned American vernacular. Art not only provided him with a wealth of intrinsically worthwhile experiences but also granted rich and nuanced ways of experiencing, understanding, and being in the world. For Donald Justice—recipient of some of poetry’s highest laurels, including the Pulitzer Prize, the Bollingen Prize, and the Lannan Literary Award for Poetry—art was a way of life.

Because Jerry Harp was Justice’s student, his personal knowledge of his subject—combined with his deep understanding of Justice’s oeuvre—works to remarkable advantage in For Us, What Music? Harp reads with keen intelligence, placing each poem within the precise historical moment it was written and locating it in the context of the literary tradition within which Justice worked. Throughout the text runs the narrative of Justice’s life, tying together the poems and informing Harp’s interpretation of them. For Us, What Music? grants readers a remarkable understanding of one of America’s greatest poets.

Jerry Harp is the author of three books of poems, including Urban Flowers, Concrete Plains. He is coeditor (with Jan Weissmiller) of A Poetry Criticism Reader (Iowa, 2006) and author of “Constant Motion”: Ongian Hermeneutics and the Shifting Ground of Early Modern Understanding. He teaches at Lewis and Clark College in Portland, Oregon.