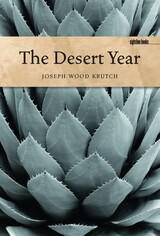 Now back in print, Joseph Wood Krutch’s Burroughs Award–winning The Desert Year is as beautiful as it is philosophically profound. Although Krutch—often called the Cactus Walden—came to the desert relatively late in his life, his curiosity and delight in his surroundings abound throughout The Desert Year, whether he is marveling at the majesty of the endless dry sea, at flowers carpeting the desert floor, or at the unexpected appearance of an army of frogs after a heavy rain.

Krutch’s trenchant observations about life prospering in the hostile environment of Arizona’s Sonoran Desert turn to weighty questions about humanity and the precariousness of our existence, putting lie to Western denials of mind in the “lower” forms of life: “Let us not say that this animal or even this plant has ‘become adapted’ to desert conditions. Let us say rather that they have all shown courage and ingenuity in making the best of the world as they found it. And let us remember that if to use such terms in connection with them is a fallacy then it can only be somewhat less a fallacy to use the same terms in connection with ourselves.”

Joseph Wood Krutch (1893–1970) was the Brander Matthews Chair of Dramatic Literature at Columbia University for two decades and served as the Nation’s drama critic for nearly thirty years. A Burroughs Medal laureate, Krutch published more than a dozen books, including The Great Chain of Life (Iowa reprint, 2000). A noted illustrator and artist, Rudolf Freund contributed to numerous nature guides and during the 1960s worked at Yale’s Peabody Museum.