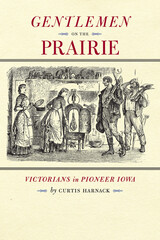 In the 1880s, the well-connected young Englishman William B. Close and his three brothers, having bought thousands of acres of northwest Iowa prairie, conceived the idea of enticing sons of Britain’s upper classes to pursue the life of the landed gentry on these fertile acres. “Yesterday a wilderness, today an empire”: their bizarre experiment, which created a colony for people “of the better class” who were not in line to inherit land but whose fathers would set them up in farming, flourished in Le Mars, Iowa (and later in Pipestone, Minnesota), with over five hundred youths having a go at farming. In Gentlemen on the Prairie, Curtis Harnack tells the remarkable story of this quite unusual chapter in the settling of the Midwest.

Many of these immigrants had no interest in American citizenship but enjoyed or endured the challenging adventure of remaining part of the empire while stranded on the plains. They didn’t mix socially with other Le Mars area residents but enjoyed such sports as horse racing, fox hunts, polo, and an annual derby followed by a glittering grand ball. Their pubs were named the House of Lords, the House of Commons, and Windsor Castle; the Prairie Club was a replica of a London gentlemen’s club, an opera house attracted traveling shows, and their principal hotel was Albion House. In St. George’s Episcopal Church, prayers were offered for the well-being of Queen Victoria.
Problems soon surfaced, however, even for these well-heeled aristocrats. The chief problem was farm labor; there was no native population to exploit, and immigrant workers soon bought their own land. Although sisters might visit the colonists and sometimes marry one of them, appropriate female companionship was scarce. The climate was brutal in its extremes, and many colonists soon sold their acres at a profit and moved to countries affiliated with Britain. When the financial depression in the early 1890s lowered land values and made agriculture less profitable, the colony collapsed. Harnack skillfully draws upon the founder’s “Prairie Journal,” company ledgers, and other records to create an engaging, engrossing story of this quixotic pioneering experiment.

AUTHOR BIOGRAPHY
Curtis Harnack grew up on a farm in Plymouth County in northwest Iowa. Professor of literature at Sarah Lawrence College from 1960 to 1971, executive director of Yaddo from 1971 to 1987, and president of the School of American Ballet from 1992 to 1997, he currently lives in New York City and still owns part of the family farm. In addition to The Attic: A Memoir, Gentlemen on the Prairie, and We Have All Gone Away, he is the author of, among others, Persian Lions, Persian Lambs; Limits of the Land; Love and Be Silent; and The Work of an Ancient Hand.