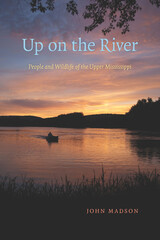 Up on the River is John Madson’s loving and often hilarious tribute to the people, animal life, and places of the Upper Mississippi. Madson’s Upper Mississippi is the part “between the saints,” from St. Louis to St. Paul, and where for thirty years he explored the bright waters of the upper reaches of the mighty river itself as well as the tangled multitude of sloughs, cuts, and side channels that wander through its wooded islands and floodplain forests.
“Some of my best time on the River has been in the company of game wardens, biologists, commercial fishermen, clammers, trappers, hunters, and a smelly, mud-smeared coterie of river rats in general, and my views of the River are far more likely to reflect theirs than those of the transportation industry,” Madson writes of his thirty-year acquaintance with the Mississippi. Traveling mainly by canoe and johnboat, he tells of encounters between archetypal commercial fishermen and archetypal game wardens over hot fish chowder, fishing for crappies in the tops of submerged trees and for walleyes amid gale force winds, nesting and migrating herons and ducks and eagles, the histories of river logging and pearling and button making, and towboats and barges and the lives of the “ramstugenous” people who move freight on the river.

Learning about the Upper Mississippi via the wry tutelage of John Madson, who discovered that “whenever I am out on a river some of its freeness rubs off on me,” readers of this classic book will also come under the spell of this freeness.
AUTHOR BIOGRAPHY

Biologist, conservationist, and Iowa native John Madson (1923-1995) is considered the father of the modern prairie restoration movement; his books include Out Home, Where the Sky Began, and Stories from Under the Sky.