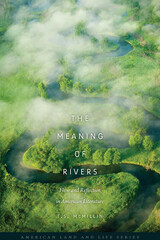 In the continental United States, rivers serve to connect state to state, interior with exterior, the past to the present, but they also divide places and peoples from one another. These connections and divisions have given rise to a diverse body of literature that explores American nature, ranging from travel accounts of seventeenth-century Puritan colonists to magazine articles by twenty-first-century enthusiasts of extreme sports. Using pivotal American writings to determine both what literature can tell us about rivers and, conversely, how rivers help us think about the nature of literature, The Meaning of Rivers introduces readers to the rich world of flowing water and some of the different ways in which American writers have used rivers to understand the world through which these waters flow.
Embracing a hybrid, essayistic form—part literary theory, part cultural history, and part fieldwork—The Meaning of Rivers connects the humanities to other disciplines and scholarly work to the land. Whether developing a theory of palindromes or reading works of American literature as varied as Henry David Thoreau's A Week on the Concord and Merrimack Rivers and James Dickey’s Deliverance, McMillin urges readers toward a transcendental retracing of their own interpretive encounters.
The nature of texts and the nature of “nature” require diverse and versatile interpretation; interpretation requires not only depth and concentration but also imaginative thinking, broad-mindedness, and engaged connection-making. By taking us upstream as well as down, McMillin draws attention to the potential of rivers for improving our sense of place and time.
AUTHOR BIOGRAPHY

T. S. McMillin is a professor in the Department of English at Oberlin. He is the author of Our Preposterous Uses of Literature: Emerson and the Nature of Reading.