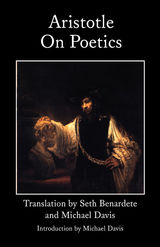 Aristotle's much-translated On Poetics is the earliest and arguably the best treatment that we possess of tragedy as a literary form. Seth Benardete and Michael Davis have translated it anew with a view to rendering Aristotle’s text into English as precisely as possible. A literal translation has long been needed, for in order to excavate the argument of On Poetics one has to attend not simply to what is said on the surface but also to the various puzzles, questions, and peculiarities that emerge only on the level of how Aristotle says what he says and thereby leads one to revise and deepen one’s initial understanding of the intent of the argument. As On Poetics is about how tragedy ought to be composed, it should not be surprising that it turns out to be a rather artful piece of literature in its own right.

Benardete and Davis supplement their edition of On Poetics with extensive notes and appendices. They explain nuances of the original that elude translation, and they provide translations of passages found elsewhere in Aristotle’s works as well as in those of other ancient authors that prove useful in thinking through the argument of On Poetics both in terms of its treatment of tragedy and in terms of its broader concerns. By following the connections Aristotle plots between On Poetics and his other works, readers will be in a position to appreciate the centrality of this little book for his thought on the whole.

In an introduction that sketches the overall interpretation of On Poetics presented in his The Poetry of Philosophy (St. Augustine’s Press, 1999), Davis argues that, while On Poetics is certainly about tragedy, it has a further concern extending beyond poetry to the very structure of the human soul in its relation to what is, and that Aristotle reveals in the form of his argument the true character of human action.