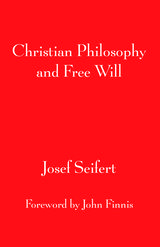 Following an ardent debate in the 1930s on the question over whether something like a “Christian philosophy” exists, as Etienne Gilson, Jacques Maritain, and others held, the term was used by many thinkers and rejected by many others, not only by Heidegger who called it a contradiction in terms, an “iron wood,” but also by Thomists who wanted to see philosophy and Christian faith strictly separated. Seifert analyses five understandings of the term “Christian philosophy” which have never been expounded with such clarity and which he rejects for different, partly for opposite, reasons. He presents these senses of Christian philosophy, and his reasons for rejecting them, in clear, straight-forward language. He presents for the first time a series of eleven wholly different and thoroughly positive and fruitful ways of understanding the (rather misleading) term “Christian philosophy.” Identifying and distinguishing these legitimate ways to speak of “Christian philosophy” shed light on the manifold fruitful relations between reason and faith. In a second part of the book, Seifert gives an example of Christian philosophy in the sense of a philosophy of religion that shows the absolute presupposedness and necessity of the existence of human, divine, and angelic free will to make any sense of divine revelation and of Christian (but also of Muslim and Jewish) religion. In a third part, he presents a penetrating analysis of seven indubitable evidences that demonstrate the nature and real existence of human free will (in a so-called “libertarian” sense that rejects the thesis of the compatibility between free will and determinism). The book is introduced by the eminent Thomist philosopher, John Finnis.