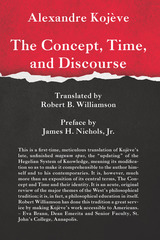 The Concept, Time, and Discourse
by Alexandre Kojève
translated by Robert B. Williamson
preface by James H. Nichols

Alexandre Kojève (1902–1968) is most widely known in America for his provocative assertion that history is at its end, that is, its completion. In the “practical” sense, this means that the process of historical development can at last be seen (if from a distance) as the realization of the Marxist “universal and homogeneous state.” However, Kojève claimed as well that the history of philosophical thinking had also reached its goal in the transformation of philosophy, as the “love of wisdom” (or the unsatisfied quest for comprehensive knowledge), into that very Wisdom itself and had done so in the most essential respects in the philosophy of Hegel.

The Concept, Time, and Discourse is the first volume of Kojève’s magnum opus, which was to have given an exposition of the (Hegelian) System of Knowledge and of which five volumes were written before his death. It contains, along with a preliminary discussion of the need for an updating of the Hegelian system, the first two of three introductions to the exposition of that system: a First Introduction of the Concept (the integrated totality of what is comprehensible, which is the final object of philosophic inquiry) and a Second Introduction concerning Time, both introductions leading to the (Hegelian) identification of the Concept with Time, an identification which alone takes adequate account of the fact that Philosophy is necessarily discursive (that it must actualize the requirements and essential structure of Discourse).

The present volume offers Kojève’s fullest statement of his Ontology. It includes a critical discussion of the traditional oppositions of the “general” to the “particular” and of the “abstract” to the “concrete” and an analysis of the act of “generalizing abstraction,” which detaches Essence from the Existence of Things. Kojève then discusses the three great figures in the three-stage development of philosophy into wisdom: Parmenides, Plato, and Hegel. Parmenides’ monadic account of Being (= Eternity) rendered it ineffable, thereby reducing philosophy to (non-philosophic) silence; Plato’s dyadic account of Being (as eternal) was intended to make Being a possible subject of discourse but failed to reflect adequately the triadic (and temporally developing) structure which Plato himself discerned in Discourse. Finally, Hegel’s triadic account of Being as itself “dialectical” achieved the final identification of the Concept with Time.

This is a first-time, meticulous translation of Kojève’s late, unfinished magnum opus, the “updating” of the Hegelian System of Knowledge, meaning its modification so as to make it comprehensible to the author himself and to his contemporaries. It is, however, much more than an exposition of its central terms, The Concept and Time and their identity. It is an acute, original review of the major themes of the West’s philosophical tradition; it is, in fact, a philosophical education in itself. Robert Williamson has done this tradition a great service by making Kojève’s work accessible to Americans. – Eva Brann, Dean Emerita and Senior Faculty, St. John’s College, Annapolis, Maryland

We now recognize Alexandre Kojève as one of the central figures of 20th century European philosophy. A translation of his The Concept, Time, and Discourse will enable English speaking readers to have a fuller understanding of his remarkably ambitious intellectual project. – Michael S. Roth, President, Wesleyan University, Middletown, Connecticut.

Robert B. Williamson is Tutor Emeritus at St. John’s College in Annapolis, Maryland, where he continues to teach. He is co-author, with Alfred Mollin, of An Introduction to Ancient Greek (University Press of America) and the author of articles on Plato’s philosophy and Einstein’s early work on relativity theory.

James H. Nichols, Jr. is Professor of Government and Dr. Jules L. Whitehill Professor of Humanism and Ethics at Claremont McKenna College, where he teaches political philosophy. Among his publications are Epicurean Political Philosophy: The De rerum natura of Lucretius, translations with interpretations of Plato’s Gorgias and Phaedrus, and most recently Alexandre Kojève: Wisdom at the End of History.

Preface
Attempt at an Updating of the Hegelian System of Knowledge
INTRODUCTION TO THE SYSTEM OF KNOWLEDGE: THE CONCEPT AND TIME
FIRST INTRODUCTION TO THE SYSTEM OF KNOWLEDGE: PSYCHOLOGICAL INTRODUCTION OF THE CONCEPT (after Aristotle)
1. The Concept and Notions
2. Notions and Things in the Extended-duration of Empirical-Existence
a. The General and the Particular
a. The Particularity of Notions
b. The Generality of Things
g. The Perception of the Particular and the General
d. Generality and Particularity of Notions and Things
b. The Abstract and the Concrete
a. The Concrete Character of Notions
b. The Abstract Character of Things
g. The Perception of the Concrete and the Abstract
d. The Abstract and Concrete Character of Notions and Things
c. Generalizing Abstraction and the Detachment of the hic et nunc
a. The Difference of Notions and Things
b. The Detachment from the hic et nunc
g. Generalizing Abstraction
3. Notions, the Concept, and Time
a. Notions and the Concept
b. The Concept and Time
SECOND INTRODUCTION TO THE SYSTEM OF KNOWLEDGE:
LOGICAL INTRODUCTION OF TIME (after Plato)
1. Being as Such and the Being-of-which-one-speaks (Given-Being)
2. Given-Being and Time
a. Being-One and Eternity (after Parmenides)
b. Being-Two and the Eternal (after Plato)
c. Being-Three (the Tri-nity) and Spatio-temporality (after Hegel)
3. Time and the Concept
Index