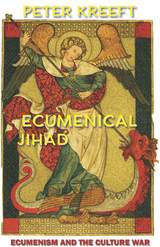 Juxtaposing “ecumenism” and “jihad,” two words that many would consider strange and at odds with one another, Peter Kreeft argues that we need to change our current categories and alignments. We need to realize that we are at war and that the sides have changed radically. Documenting the spiritual and moral decay that has taken hold of modern society, Kreeft issues a wake-up call to all God-fearing Christians, Jews, and Muslims to unite together in a “religious war” against the common enemy of godless secular humanism, materialism, and immorality.

Aware of the deep theological differences of these monotheistic faiths, Kreeft calls for a moratorium on our polemics against one another so that we can form an alliance to fight together to save Western civilization.

“Be forewarned. This book pricks prejudices, jostles assumptions, and can do permanent harm to complacent Christianity. Definitely not recommended for people who are unprepared for a rollickingly adventurous journey into truths that might change them forever. Don’t say you were not warned.” – Fr. Richard John Neuhaus

“Peter Kreeft is one of the premier apologists in America today, witty, incisive and powerful. On the front lines in today’s culture war, Kreeft is one of our most valiant intellectual warriors.” – Charles Colson

“This racy little book opens up a far-reaching theme. With entertaining insight Kreeft looks into the attitudes, alliances, and strategies that today’s state of affairs requires of believers.  Catholics, Protestants, and Orthodox alike need to ponder Peter Kreeft’s vision of things – preferably, in discussion together. What if he is right?” – J.I. Packer

“With his usual brilliance and wit, Peter Kreeft offers us a combat man manual for the culture wars. Ecumenical Jihad is a reasoned defense of the rights of God and the duties of man, and a bold exhortation to spiritual warfare. It is wise, holy, and prophetic.” – Michael O’Brien, editor, Nazareth Journal, and author of many novels.

AUTHOR BIOGRAPHY
Peter Kreeft teaches philosophy at Boston College and is the author of scores of books in philosophy and religion, among them, from St. Augustine's Press: An Ocean Full of Angels, Socratic Logic, The Philosophy of Jesus, Jesus-Shock, The Sea Within, I Surf Therefore I Am, If Einstein Had Been a Surfer, and Summa Philosophica.
TABLE OF CONTENTS
Contents
The State of the Jihad, 2019
1. Ecumenical Jihad
2. A Christian Defense of Jihad
3. A Defense of Fanaticism
4. A Defense of "Culture Wars": A Call for Counterrevolution
5. Learning from Other Religions
6. What Christians can Learn from Confucius, Buddha, Muhammad, and Moses
7. Is There Such a Thing as "Mere Christianity"?: A Trialogue with C. S. Lewis, Martin Luther, and Thomas Aquinas
8. The Eucharist and Ecumenism
9. What Can I Do?
Conclusion