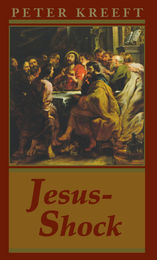 Jesus Shock is the second in a series of short works on seminal concerns of the impact that Jesus Christ made in the world. The first work, The Philosophy of Jesus (St. Augustine’s Press, 2007), explored philosophy in light of Jesus, rather than the other way around. The present work investigates the reception Jesus received both in His lifetime and continuously to the present time, not only from His enemies, but from His friends, a reception of shock, astonishment, even disgust.
Perhaps a few remarks from the book best explains it:

The point of the book:
The point of the title: Imagine a storm has downed a telephone wire so that everyone who touches it is shocked in every cell of his body. Well, the storm of God’s crazy love has “downed” (incarnated) Jesus, and everyone who touches this “live wire” is shocked in every cell of his soul.
The question of the book: Why is “Jesus” the most non-neutral, the most controversial, the most embarrassing name in the world? Why is talking about Jesus like talking about sex?
This whole book is really about a single movie line, the greatest line in the greatest movie in history. Bet you know what it is.
Jesus-Shock is about the Real Presence of Christ in the Gospels and in the Eucharist. It
is not about the theology of the Real Presence, but about the experience of Him there, and about the experience of everyone in the Gospels who met Him.

What was the bitterest controversy of the Protestant Reformation, both between Protestants and Catholics and between different Protestant denominations, the one that had both sides calling the other not just heretics but devils?
Answer: It was not Justification by Faith, the hallmark of the Reformation, even though that question is about nothing less momentous than how to be saved, how to get to Heaven. It was not the relation between religion and politics, even though that was a matter of life or death (literally, on battlefields and at guillotines and hangings) and not just a matter of truth or falsity, or of good or evil. It was not about the sufficiency of the Bible, or the corruption in the Church, or the relation between the Bible and the Church. It was not about the Pope, and the governance of the Church. It was not about Mary or saints or angels or Purgatory. It was not about the Incarnation or the Trinity or the Atonement.
It was about the Real Presence of Christ in the Eucharist.

Jesus-Shock, in addressing this controversy forcefully and faithfully, shows the reasons why to this day the name of “Jesus” stirs up controversy, even revulsion, in polite society. In the true spirit of ecumenism, it also points the way toward a true rapprochement among His modern-day disciples.