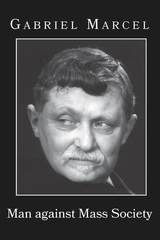 The central theme of this important book is that we are paying the price of an arrogance that refuses to recognize mystery. The author invites the reader to enter into the argument that he holds with himself on a great number of problems. Written in the early 1950s, Marcel’s discussion of these topics are remarkably contemporary, e.g.:

* Our crisis is a metaphysical, not merely social, one.

* What a man is depends partly on what he thinks he is, and a materialistic philosophy turns men into things.

* Can a man be free except in a free country?

* Stoicism is no longer a workable philosophy because today pressure can be put on the mind as well as on the body.

* Technical progress is not evil in itself, but a technique is a means that, regarded as an end, can become either an idol or an excuse for self-idolatry. State control of scientific research, leading to a concentration on new means of destruction, is a calamity.

* Fanaticism is an opinion that refuses to argue, and so the fanatic is an enemy of truth.

* The kind of unification that science is bringing about today is really an ironing out of differences, but the only valuable kind of unity is one that implies a respect for differences.

* We must beware of thinking in terms of great numbers and so blinding ourselves to the reality of individual suffering. Our philosophical approach to being is made possible only by our practical approach to our neighbor.

* We must encourage the spirit of fraternity and distrust the kind of egalitarianism that is based on envy and resentment.

* No man however humble should feel that he cannot spread the light among his friends. No easy solution is offered, but the author conveys his own faith that ultimately love and intelligence will triumph.