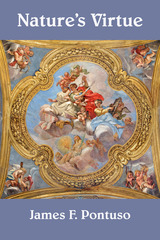 Nature's Virtue
by James F. Pontuso
St. Augustine's Press, 2016
Cloth: 978-1-58731-557-2
Virtue is not what it used to be. It has lost its good name. If virtue were a television show, it would garner low ratings and promptly be cancelled. If virtue were running for president, it would fare poorly in the Iowa caucuses and would drop out of the race after a weak showing in the New Hampshire primary. Virtue has a bad name, both because people no longer use the term and because it is associated with repression of desires. Today, it not considered healthy to keep inner urges at bay for very long. Virtue comes off looking like a relic of a quaint, narrow-minded, uptight age. Virtue does not support self-esteem since it is difficult to master the passions.

Yet virtue seems to be a part of everyday life. What accounts for the kindly relationships between people? Why are most people peaceful, law abiding, and decent? If, as some insist, there is no foundation for virtue, or people act only out of self-interest, how can we explain why so many people are good to each other?

Prestigious scholars, such as Alasdair MacIntyre, After Virtue, James Q. Wilson, The Moral Sense, Steven Pinker, The Better Angels of Our Nature, and Philippa Foot, Natural Goodness, have attempted to answer this question. While these authors make great strides in explaining the character of goodness, their works do not face the problem raised by “anti-foundationalist.” Anti-foundationalist such as Richard Rorty, Friedrich Nietzsche, Martin Heidegger, and the libertarian school of economics maintain that humans lack a capacity for comprehending what is good or bad. For anti-foundationalists there are no higher metaphysical principles that guide behavior. Prescriptive judgments are little more than long-held cultural prejudices fortified by habit so as to seem natural. Therefore, philosophic claims about virtue are little more than guesses about proper conduct.

Nature’s Virtue squarely faces the challenge of anti-foundationalists. The book points out the defects of these ideas. It does so by presenting a contemporary restatement of the case for grounding virtue in Platonic forms or ideas.
AUTHOR BIOGRAPHY
James F. Pontuso is Charles Patterson Professor of Government & Foreign Affairs. He has authored or edited seven books and published more than ninety articles, reviews, and essays. He has taught or lectured in a dozen countries including as John Adams Fellow at the University of London (1998), Fulbright scholar