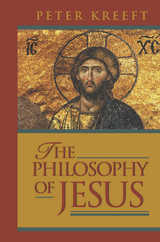 This book (1) looks at Jesus as a complete human being (as well as divine), therefore also as a philosopher; (2) looks at philosophy as Jesus' pre-modern contemporaries did, as a wisdom, a world-view, and a way of life rather than as a super-science (Descartes, Hegel) or as a servant-science (Hobbes, Hume); and (3) looks at philosophy in light of Jesus rather than at Jesus in light of philosophy. It explores the consequences of Etienne Gilson's point that when St. John brought Christianity and Greek philosophy into contact and identified the Messiah the Jews had most deeply sought with the logos that the Greeks had most deeply sought, nothing happened to Christ but something happened to the logos.

And, besides, it has the greatest ending of any philosophy book in a century.

Introduction 1: Who Is It For?

Introduction 2: How Is Jesus a Philosopher?

Introduction 3: What Are the Four Great Questions of Philosophy?

I. Jesus’ Metaphysics (What is real?)

* The Metaphysics of Love

* The Moral Consequences of Metaphysics

* Sanctity as the Key to Ontology

* The Metaphysics of “I AM”

II. Jesus’ Epistemology (How do we know what is real?)

III. Jesus’ Anthropology (Who are we who know what is real?)

IV. Jesus’ Ethics (What should we be to be more real?)

* Jesus and the Secret of Moral Success

* Jesus and Politics: Is He Left or Right?

Peter Kreeft, Professor of Philosophy at Boston College, is author of over forty books, including two from St. Augustine’s Press, Socratic Logic and The Sea Within.